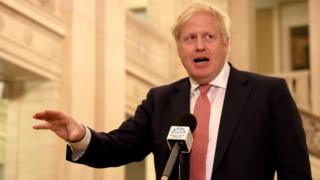 Image copyright PAcemaker Image caption Boris Johnson was last in Northern Ireland in January, when a deal was struck to restore power-sharing

It will be the prime minister’s first trip to Northern Ireland since January, when a deal was struck to restore power-sharing.

They will discuss how Westminster and Stormont have tackled Covid-19.

Ahead of the trip, Mr Johnson said he recognised that “close working” had helped during the pandemic.

“I cannot overstate how important the close co-operation that we have seen between central and devolved government will continue to be to this,” he added.

The prime minister is also set to hold his first face-to-face meeting with Micheál Martin, since the Fianna Fáil leader became taoiseach in June.

The two leaders are expected to discuss the shared fight against coronavirus and work on a sustainable economic recovery, as well as the UK’s ongoing negotiations with the EU to reach a trade deal, said Downing Street.

A statement from the Irish government said the meeting at Hillsborough Castle will be “an opportunity for discussion of a number of issues of mutual concern”.

“Covid-19 will top the agenda and the two leaders are expected to discuss their respective experiences of managing the virus and dealing with its economic and societal impact,” it said.

“They will also discuss Brexit, including the continuing negotiations between the UK and the EU, with less than six months to the end of the transition period.”

The transition period is due to end on 1 January and a new “trade border” will begin operating between Northern Ireland and the rest of the UK.