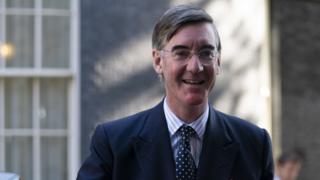 Conservative minister Jacob Rees-Mogg will be back at work on Monday after self-isolating at home.

One of his six children had showed symptoms of coronavirus and was tested for the virus last week. The test result was negative.

Mr Rees-Mogg is the leader of the Commons and the MP for North East Somerset.

It means the cabinet minister will be present at Westminster for Monday’s Brexit vote on the Internal Markets Bill, where some of the government’s own MPs are expected to abstain or rebel.

His Labour counterpart Valerie Vaz wished Mr Rees-Mogg and his family well, saying: “We know it had to be something very, very serious for him not to be here.”

The SNP’s spokesman, Tommy Sheppard, said he would miss being “patronised in the flesh” by Mr Rees-Mogg.

He added: “Can I also wish the Leader of the House and his family well. I can hardly hide my disappointment