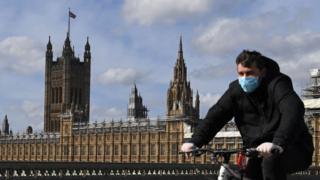 MPs could take part in PMQs, urgent questions and statements via video link when they return to Parliament after recess.

In a letter to MPs, Commons Speaker Sir Lindsay Hoyle says plans for a virtual parliament are progressing well.

The main proposal would see some proceedings take place through video link, and broadcast live.

Parliament is due to return on 21 April to debate the coronavirus outbreak and other matters.

In his letter, Sir Lindsay said, given the scale of the challenge, that there would be “bumps along the way”.

“But once these proceedings have been judged to be delivered in a satisfactory and sustainable way, both from a technological and participatory point of view, then the House can consider extending the model to other proceedings such as debates on motions and consideration of legislation.”

He said: “I recognise the urgent need to put new arrangements in place and will do everything I can to ensure the House is presented with the opportunity to take a decision on this matter sooner rather than later.”

The House of Commons Commission will discuss the plans at a meeting on Thursday.

It is understood that the committee – which is responsible for the administration and services of the House of Commons – is highly likely to nod through some changes.

MPs would then have to approve the changes the following week.

The prime minister was discharged from hospital on Sunday night, after spending three nights in intensive care to receive treatment for coronavirus.

Downing Street said the PM will not return to work immediately, and would continue his recovery at his country residence, Chequers.

MPs have been grappling with how to keep Parliament running during this crisis.

For obvious reasons, they don’t want to be travelling around the country and sitting in a tightly packed chamber. But they do want to continue with scrutiny of what the government is doing.

The Commons Commission is highly likely to approve some changes on Thursday – allowing MPs to contribute to departmental questions and statements remotely.

A more controversial question is remote voting. Some in Parliament have concerns on issues like security. It seems less likely a speedy decision will be made on that, although I understand Commons Leader Jacob Rees Mogg is prepared to explore all options and most MPs acknowledge traipsing through packed lobbies can’t continue while social distancing is in place.

The changes are a response to a very specific crisis.