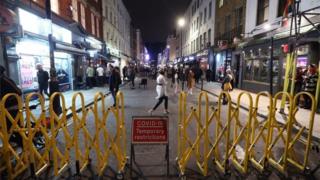 Labour is “very sympathetic” to a bid by Conservative MPs to increase parliamentary scrutiny over coronavirus restrictions in England, shadow justice secretary David Lammy has said.

Tory Sir Graham Brady wants MPs to have a say on changes to lockdown rules.

Ex-Commons Speaker John Bercow and Steve Baker, a former Brexit minister, have also spoken in favour of the move.

The government says it wants to work with MPs while ensuring ministers can react quickly to suppress the virus.

It has also said MPs will get the chance to vote retrospectively on the ‘rule of six’, which puts a limit on the number of people at social gatherings.

Mr Lammy told the BBC’s Andrew Marr he was “very sympathetic” to the amendment.

“We need more transparency… and we should be debating the regulations and rules for the country,” he said.

However he avoided committing support to Sir Graham, pointing out that Labour would table its own amendment and would wait and see if it was selected by Commons Speaker Sir Lindsay Hoyle this week.

In March, Parliament passed the Coronavirus Act. It gave the government powers to respond to the pandemic, including moves such as postponing local elections, closing down pubs and allowing courts to use live links.

The powers granted by the act were time-limited and can only be extended with the House of Commons’ approval.

MPs will be asked to renew the powers on Wednesday but several have expressed concern and Sir Graham has tabled an amendment that would give Parliament a say over new national restrictions before they are brought into force.

Speaking to Sky News’ Sophy Ridge on Sunday programme Conservative MP and former Brexit Minister Mr Baker said: “How do people think that liberty dies? It dies like this with government exercising draconian powers, without parliamentary scrutiny in advance, undermining the rule of law by having a shifting blanket of rules that no-one can understand.”

BBC parliamentary correspondent Mark D’arcy says the initial steer is that it is unlikely the Speaker would select Sir Graham’s amendment, meaning it would not be put to a vote.

But, he says, the Speaker does consider the breadth of support for an amendment, including its level of cross-party appeal, so support from Labour figures would influence his decision.

Sir Graham, who is chairman of the 1922 Committee of Conservative backbenchers, has support from a wide spectrum of MPs including 50 other Conservatives, an ex-party leader Sir Iain Duncan Smith and former-Labour deputy leader Harriet Harman.