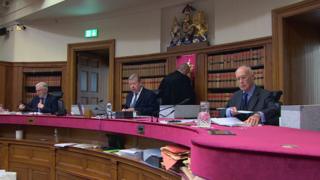 Scotland’s highest civil court is to again rule on whether or not Boris Johnson’s suspension of the UK Parliament is legal.

A judge at the Court of Session last week rejected an attempt by a cross-party group of politicians to have the suspension declared unlawful.

They appealed to the court’s Inner House, with a panel of three judges being asked to overturn the decision.

The panel is expected to deliver its ruling on Wednesday.

Parliament was officially suspended for five weeks – a process known as proroguing – in the early hours of Tuesday morning, with MPs not due back until 14 October.

Amid unprecedented scenes in the Commons, some MPs protested against the suspension with signs saying “silenced” while shouting: “Shame on you.”

The prime minister’s opponents argue that his aim is to avoid parliamentary scrutiny of his Brexit plans before the UK’s current departure date of 31 October.

The UK government insists this is not the case and that the aim of proroguing Parliament is to allow Mr Johnson to set out his legislative plans in the Queen’s Speech while still allowing sufficient time for MPs to debate Brexit.

A bill designed to prevent a no-deal Brexit was passed by MPs ahead of the five-week shutdown, but Mr Johnson’s bid to hold a general election in October failed twice to get the required majority

In his ruling last week, judge Lord Doherty said Mr Johnson had not broken the law by proroguing Parliament, and that it was for MPs and the electorate to judge the prime minister’s actions rather than the courts.

The case was brought by a group of about 75 largely pro-Remain MPs and peers, headed by SNP MP Joanna Cherry.