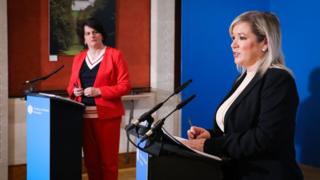 Arlene Foster and Michelle O’Neill are expected to appear alongside each other in public after a meeting of ministers from both sides of the Irish border later.

The first and deputy first ministers have not appeared together since the row over the funeral of the veteran republican Bobby Storey last month.

They will attend a meeting of the North South Ministerial Council in Dublin.

It will be the first time the council has met in three-and-a-half years.

The cross-border body was not able to sit during the suspension of devolved government at Stormont.

Covid-19 and Brexit on agenda

The meeting at Dublin Castle on Friday will be attended by Stormont ministers and their Irish counterparts, including Taoiseach (Irish Prime Minister) Mícheál Martin and Tánaiste (Deputy Prime Minister) Leo Varadkar.

They will discuss matters of mutual interest, including the Brexit trade negotiations, the coronavirus pandemic and concerns about international travel to the island.

The Republic of Ireland has a so-called “green list” of 15 nations from which travellers entering the country do not have to self-isolate for 14 days, but Northern Ireland has a list of 58 such countries.

In the Dáil (Irish parliament) this week, Mr Martin said the Republic of Ireland had “much stricter” travel guidance than Northern Ireland.

“I think it is important to recognise the dangers travel can present in terms of creating spikes on the island of Ireland. We have to work towards a joint approach in relation to that,” he added.

The ministers are also expected to discuss infrastructure issues, including the Belfast-to-Dublin rail link.

Democratic Unionist Party (DUP) leader Mrs Foster is due to share a platform with Ms O’Neill, the Sinn Féin vice-president, during a press conference after the meeting.

It will be the first time they have appeared together since Ms O’Neill attended the funeral of Mr Storey, who was a senior figure in Sinn Féin.

She was among hundreds of mourners at the service in west Belfast in spite of restrictions on numbers of people allowed to gather together.