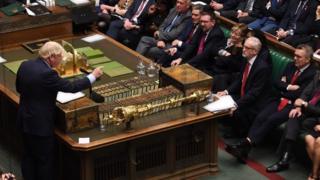 Tackling the growing abuse and intimidation of MPs does not appear to be a “high priority” for party leaders, the UK’s standards watchdog has said.

Lord Evans, chairman of the committee on standards in public life, said leaders must set a better example to their supporters on social media.

Both were giving evidence to the Home Affairs committee.

Prime Minister Boris Johnson has called for all sides to “calm down” after a row over the use of inflammatory language in the Commons, in which he was accused of using “dangerous” words.

But the PM insisted he had been a “model of restraint” and the government plans to create a new criminal offence of intimidating candidates and campaigners in the run up to an election.

Labour leader Jeremy Corbyn has singled Mr Johnson’s language out for criticism, while arguing that all MPs need to do more to moderate their behaviour.

However, neither he nor Mr Johnson have signed up to a draft code of conduct drawn up by the standards committee aimed at improving the “intimidatory, bullying and abusive culture” in public life.

Speaking to the committee, Lord Evans said parties had not been “beating a path to our door [which] would suggest this is not top of people’s priorities at the moment, which worries me”.

He warned against being too “nostalgic” about the standard of political debate in the UK, which he said had always featured personal attacks.

But Lord Evans said the “abuse and intimidation” had got out of hand in the past five years – driven, in part, by social media, and it was threatening democracy by deterring people from standing for election.

His own committee had heard some MPs had even been scared into changing their votes on Brexit – something that would have concerned him in his previous role as the head of MI5.

“We would have seen that as a really serious national security issue, if it had been another state doing it,” he said.

Lord Evans argued social media companies had to do more to stamp out abuse,