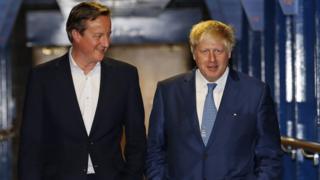 Speaking to the Times newspaper ahead of his book launch, the former Tory PM attacked a number of his Leave-backing colleagues for “trashing the government of which they were a part”.

Mr Cameron said the result in 2016 had left him “hugely depressed”.

He told the newspaper he knew “some people will never forgive me”.

The former PM also criticised Mr Johnson’s strategy for dealing with Brexit, including his decision to suspend Parliament ahead of the Brexit deadline of 31 October and removing the whip from Tory MPs who voted to block a no-deal Brexit.

But Mr Johnson said the suspension – or prorogation – was a normal action of any new government to let them lay out their new policies in a Queen’s Speech, and blocking no-deal would “scupper” his negotiations with the EU.

Mr Cameron called the referendum in 2016 after promising it in the Conservative Party’s election manifesto the year before.

He campaigned for Remain, but lost the vote by 52% to 48%, and announced within hours he would be stepping down as PM.

Mr Cameron – who was prime minister between 2010 and 2016 – said Mr Johnson, Mr Gove, Penny Mordaunt and Priti Patel had “left the truth at home” on the referendum campaign trail, especially when it came to immigration.

He said: “Boris had never argued for leaving the EU, right?

“Michael was a very strong Eurosceptic, but someone whom I’d known as this liberal, compassionate, rational Conservative ended up making arguments about Turkey [joining] and [the UK] being swamped and what have you.”

Mr Cameron called it “ridiculous” and “just not true” when Ms Mordaunt made a similar argument about Turkey, followed by claims by the now-Home Secretary Ms Patel that “wealthy people didn’t understand the problems of immigration”.

He added: “I suppose some people would say all is fair in love and war and political campaigns. I thought there were places Conservatives wouldn’t go against each other. And they did.”

Mr Cameron said the Leave side had a “very powerful emotional argument”, while Remain had the “very strong technical and economic arguments”, and the former – plus the issue of immigration – was a “winning combination” for his rivals.