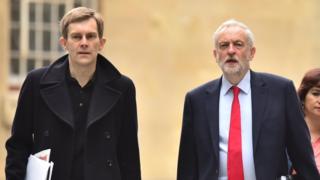 Labour MPs who lost their seats in the election have called for “fundamental change” at the top of the party.

In a letter to the Observer, the group said “cronyism” in the party and Labour’s “unwillingness” to stand up to anti-Semitism were repeatedly raised as issues on the doorstep.

An “unflinching” look at the causes of Labour’s defeat was now needed, they warned, rather than a “simple review”.

A panel has been established to look at Labour’s election failure.

The party lost its fourth general election in a row on 12 December, recording its worst performance, in terms of seats, since 1935, as a string of constituencies in its traditional Northern strongholds fell to the Conservatives.

Some MPs who lost their seat have blamed Jeremy Corbyn’s unpopularity with voters, while others have argued Brexit was the main reason for the party’s defeat.

A review launched by Labour Together – a network of activists and figures in the party that includes former leader Ed Miliband – will view attempts to pin the blame on a single cause as simplistic and wrong.

But in their letter, defeated MPs including Mary Creagh and Anna Turley said the scale of Labour’s defeat meant it needed to go “way beyond a simple review”.

“We were rejected on doorsteps not just because of our woolly, changing position on Brexit, or in Scotland because of our weak commitment to the union, but because the very people we were supposed to be fighting for did not think the policies in our manifesto related to their lives.

“The focus on nationalisation and uncontrolled spending commitments meant people simply didn’t believe us. Sadly, this was particularly true with those most affected by the poverty and injustice that 10 years of Tory government has created.

“Lastly, cronyism at the top of our party and repeated unwillingness to stand up to the stain of anti-Semitism were constantly relayed back to us on the doorstep, shaming the traditional values of our once great anti-racist party.”

Mr Corbyn has said he will stand down as leader “early next year”.