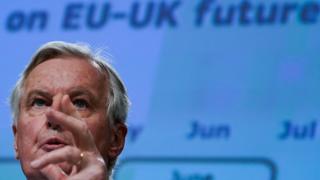 Prime Minister Boris Johnson has been urged by a group of MEPs to delay his Brexit deadline as countries around the world battle the coronavirus.

The European Parliament’s largest group of MEPs said the pandemic puts pressure on the chance of securing a trade deal by the planned date.

The PM’s spokesman insisted there were no plans to change the timetable.

It comes as EU and UK representatives met to discuss implementing the Brexit withdrawal agreement over video link.

Under the agreement, the UK enters a transition period where it will continue to follow EU rules until 31 December 2020, by which time both sides say they hope to have agreed a trade deal.

Downing Street said the talks to agree a deal are continuing to take place over the phone, amid the coronavirus outbreak.

The EU’s chief negotiator Michel Barnier has contracted the disease, and his opposite UK number David Frost has had to self-isolate.

The European People’s Party MEP Christophe Hansen, a negotiator on the parliament’s international trade committee, said: “Under these extraordinary circumstances, I cannot see how the UK government would choose to expose itself to the double whammy of the coronavirus and the exit from the EU single market, which will inevitably add to the disruption, deal or no deal.

“I can only hope that common sense and substance will prevail over ideology.

“An extension of the transition period is the only responsible thing to do.”

“The EU has always been open to extending the transition period – the ball is now clearly in the British court.”

The European Parliament will get a say in ratifying any future trade deal.

When asked if an extension was possible, the prime minister’s spokesman said: “The transition period ends on December 31 2020. This is enshrined in UK law.”