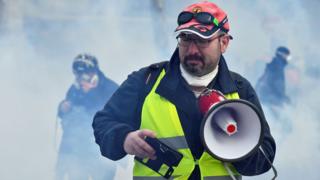 Dissatisfaction with democracy within developed countries is at its highest level in almost 25 years, according to University of Cambridge researchers.

Academics have analysed what they say is the biggest global dataset on attitudes towards democracy, based on four million people in 3,500 surveys.

The UK and the United States had particularly high levels of discontent.

“Across the globe, democracy is in a state of malaise,” report author Roberto Foa said.

The study, from the University of Cambridge’s Centre for the Future of Democracy, has tracked views on democracy since 1995 – with the figures for 2019 showing the proportion dissatisfied rising from 48% to 58%, the highest recorded level.

“We find that dissatisfaction with democracy has risen over time and is reaching an all-time global high, in particular in developed countries,” Dr Foa said.

The research, covering 154 countries around the world, is based on asking people if they are satisfied or dissatisfied with democracy in their own country.

Data for some countries goes back to the 1970s and the long-term picture recorded a steady upwards swing of the pendulum towards more satisfaction with democracy through the last decades of the 20th Century.

This was an era of the collapse of Communist power in Eastern and Central Europe and the apparent ascendancy of Western democracy – with “global sentiment” appearing to be supportive of the rise in democracy.

But over the past decade, this appears to have shifted steadily in a more negative direction – with rising dissatisfaction.

The study suggests this could reflect political and social reverberations of the “economic shock” of the financial crash of 2008 and disquiet from the refugee crisis of 2015 and “foreign policy failures”.

It warns of a loss confidence in democracy and says the rise of populism is not so much a cause but a symptom.

In the UK, the study says, from the 1970s satisfaction with democracy rose consistently for 30 years – reaching a high point in the years following the millennium.

But it has slipped downwards since 2005 – following global trends such as the financial crisis and national controversies such as MPs’ expenses.

And researchers say there has been a more recent plunge in satisfaction, which could reflect the political stalemate around Brexit,