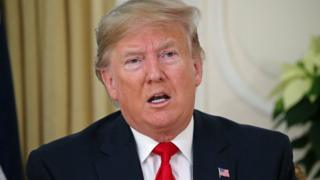 US President Donald Trump has said he could “work with anybody” in No 10 – nine days ahead of a general election.

Speaking on a three-day visit to the UK, Mr Trump said he would “stay out of the election”, that he was a “fan of Brexit” and he thought PM Boris Johnson was “very capable”.

Mr Trump is in the UK for a Nato summit being held in Watford on Wednesday.

He will attend a reception hosted by the Queen at Buckingham Palace later, where protests are expected.

The US President was speaking during a breakfast meeting with Nato Secretary General Jens Stoltenberg at the US ambassador’s residence in London.

Mr Trump’s comments came moments after he told reporters that he was staying out of the election on 12 December “because I don’t want to complicate it”.

Scotland Yard has said road closures will be in place in central London during the Nato summit.

Welcome POTUS and FLOTUS to the UK – it’s great to have them back! pic.twitter.com/BSwepyEwRu

And he will attend a working lunch with representatives from Estonia, Greece, Latvia, Poland, Romania, Lithuania, Bulgaria and the UK.

Mr Trump said he would be meeting Mr Johnson during his visit to the UK, adding: “I have meetings set up with lots of different countries”.

It is unclear whether any meeting between the two leaders will be a one-on-one discussion.

BBC diplomatic correspondent James Lansdale said the Conservatives’ HQ wanted to avoid such a meeting “to avoid pictures that could be used by his (Boris Johnson’s) opponents” in the upcoming general election.

Foreign Secretary Dominic Raab – who will meet US Secretary of State Mike Pompeo later – said arrangements for such bilateral meetings were “always quite fluid”.

He told BBC Radio 4’s Today programme: “The role of this leaders’ summit – and we’re hosting it – is for the prime minister to bring all of our north American and European partners together and show, through Nato, we can be bigger than the sum of our parts.”

Mr Johnson and Mr Trump did speak on Saturday,