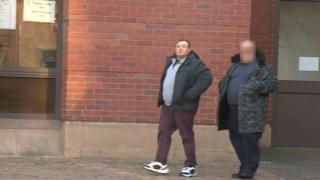 A man who admitted making a threat against Jeremy Corbyn has been given a suspended prison sentence.

Samuel Naylor phoned the Brexit Party headquarters shortly before 09:30 on 17 November, leaving a voicemail saying he wanted to kill the Labour party leader.

Nottingham Magistrates’ Court heard the 37-year-old, of Nottingham Road in Eastwood, had drunk a bottle of whisky on the morning he made the call.

Naylor pleaded guilty to one count of sending a threatening message.

He was sentenced to four weeks in prison, suspended for a year, and ordered to pay costs of £207.

The court heard the voicemail left by Naylor included swearing and him saying he wanted to “kill” Mr Corbyn.

When interviewed by police, Naylor said he had no political stance and believed Mr Corbyn was the leader of the Liberal Democrats party.

Anthony Cheung, prosecuting, said Naylor told officers he did not know any politicians, but accepted anyone listening to the message would not have known “what he was capable of and may therefore have believed the threat”.

Defending, Paul McLeod said Naylor – who suffers from alcoholism – could not remember making the call, which was made on the anniversary of his mother’s death, and was “absolutely ashamed about it”.

“Leaflets had been dropping through his door,” he said.

“In his drunken stupor that was paramount in his mind that morning.”

Roger Clay, chief magistrate at the hearing, told Naylor the prison sentence was