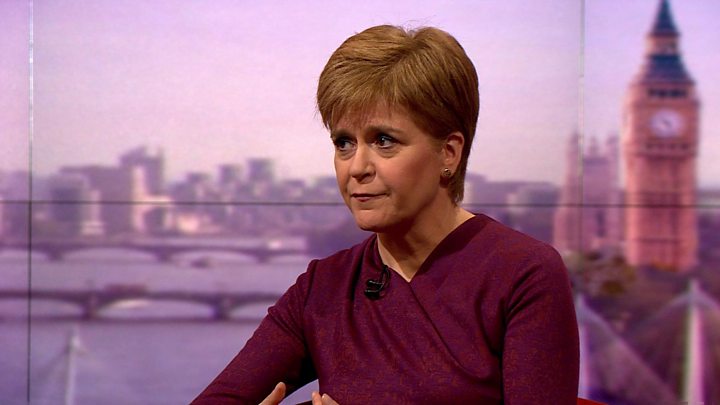 Labour would not “turn their backs” on the SNP in the event it forms a minority government, Nicola Sturgeon has claimed.

She told the BBC’s Andrew Marr Show that a minority Labour government would need the support of another party to get its policies implemented.

The SNP is willing to support Labour if no party wins an overall majority, if it agrees to certain conditions.

However, Labour leaders have ruled out negotiating with the SNP.

Shadow chancellor John McDonnell told the Financial Times last week there would be “no negotiation, no deal, no coalitions”.

Challenged on the issue by Andrew Marr, Ms Sturgeon pointed to her own experience leading a minority government at Holyrood.

“You can’t do anything in a minority government unless you have the support of another party”, she said.

She confirmed that the SNP would not vote for a Conservative Queen’s Speech or budget but the party would offer to support a Labour minority government.

“I don’t think they’re going to turn their backs on that, and if they do – I think they’ve got some big explaining to do,” she added.

The SNP has ruled out a formal coalition with Labour but would back them on an issue-by-issue basis.

In return, the SNP wants Jeremy Corbyn’s party to agree to the “principle” of a second independence referendum, scrapping Trident and ending austerity.

She told Andrew Marr: “I’m not asking Labour to support Scottish independence, I’m not even asking them to support the idea that there should be another independence referendum.

“I’m making the reasonable request that they respect the principle,