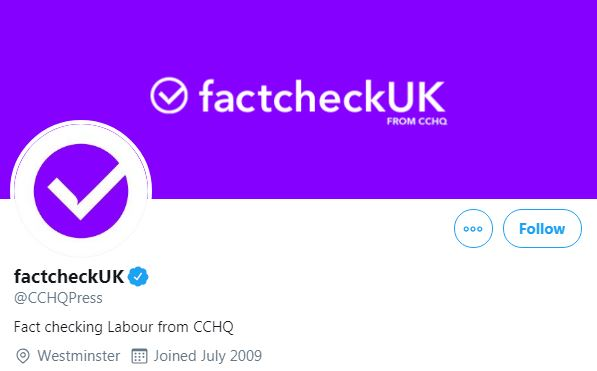 The Conservative Party has been sharply criticised by a UK fact-checking agency after it rebranded one of its Twitter accounts.

After the debate, the account reverted back to its original branding.

Twitter is yet to comment on the change, but told the BBC it was looking into it.

Fact-checking agency FullFact said in a statement: “It is inappropriate and misleading for the Conservative press office to rename their twitter account ‘factcheckUK’ during this debate.

“Please do not mistake it for an independent fact checking service such as FullFact, FactCheck or FactCheckNI.”

Asked on Sky News about the rebranding, Tory chairman James Cleverly said his party had “made it absolutely clear it is a Conservative Party website”.

Reacting to the decision, the Labour Party tweeted: “The Conservatives’ laughable attempt to dupe those watching the #ITVDebate by renaming their twitter account shows you can’t trust a word they say.”

The Liberal Democrats, meanwhile, said the ploy was “straight out of Donald Trump or Putin’s playbook”, adding the Tories were “deliberately misleading the public”.

Twitter has policies regarding deceptive behaviour on the platform. The company said it can remove an account’s “verified” status if the account owner is said to be “intentionally misleading people on Twitter by changing one’s display name or bio”.

Other users on the platform subsequently changed their display names to mock the move. Among them, writer Charlie Brooker, who tweeted: “We have always been at war with Eastasia”, a reference to George Orwell’s dystopian novel, Nineteen Eighty-Four.