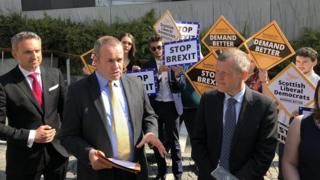 Change UK’s lead candidate for the EU elections in Scotland has quit the race and is now endorsing the Lib Dems.

David Macdonald is top of the Change UK list in Scotland, but said the party “don’t stand much of a chance” of winning a seat in the 23 May poll.

He urged pro-Remain voters to back the Lib Dems to avoid “splitting the vote” and benefiting pro-Brexit parties.

Change UK MP Chuka Umunna said it was “disappointing” that Mr Macdonald had “let down his fellow candidates”.

Mr Macdonald is the second lead candidate to quit the Change UK list in Scotland, after David Russo withdrew one day into the race.

Because the deadline for registrations has passed he will still appear on the ballot paper for the party, but has written to MP Anna Soubry to announce his resignation and underline his backing for the Lib Dems.

Should Change UK win a seat in the Scotland constituency, it would now pass to the next candidate on the list, Peter Griffiths.

Speaking alongside Scottish Lib Dem leader Willie Rennie outside Holyrood, Mr Macdonald – an independent councillor in East Renfrewshire – said it had been “an honour” to be Change UK’s lead candidate in Scotland.

He said the new party was “genuinely a force for good”, but that “if things continue as they are, the Remain vote will split i