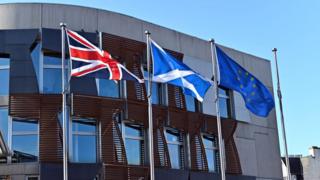 The European Union flag is to be taken down outside the Scottish Parliament when the UK leaves on 31 January, it has been confirmed.

Former Europe minister Alasdair Allan was campaigning for the flag to stay up to mark Scotland’s 62% vote for Remain.

But the parliament’s management group has confirmed that it will come down.

Presiding Officer Ken Macintosh told MSPs that the Council of Europe Flag will be flown on Europe Day “as a mark of our continued ties with that body”.

The flag will be lowered at 23:00 on 31 January, at the moment the UK officially leaves the EU.

Mr Allan had submitted a parliamentary motion saying that parliament “should continue to fly the EU flag on its grounds, in line with the democratic decisions of Scotland’s voters and MSPs to remain in the EU”.

This was backed by a number of his SNP colleagues and some Greens, but has now been dismissed by the parliament’s cross-party corporate body management group.

An email from Mr Macintosh to all MSPs said the group had agreed that “from 11pm on 31 January the Scottish Parliament will no longer fly the EU flag on a daily basis”.

He added: “The corporate body decided that on Europe Day we shall fly the Council