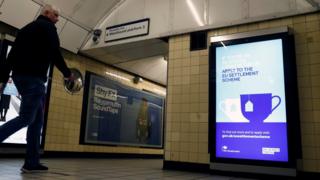 The Home Office has been slow to respond to concerns that vulnerable people are struggling to access the EU settlement scheme, campaigners say.

A group representing EU citizens, the3million, claimed some people were “struggling to apply” or still do not know about the scheme.

It comes after the government’s immigration watchdog criticised the Home Office’s handling of the scheme.

All EU citizens who want to stay in the UK after Brexit have to apply.

A House of Commons report says 3.1 million people have done so, so far.

A separate report by David Bolt, the chief inspector of borders and immigration, praised some of the Home Office’s work to help vulnerable applicants, but also raised concerns and made several recommendations for improvements.

The immigration watchdog said: “Most of the recommendations were aimed at improving the way the scheme operates for vulnerable and hard-to-reach individuals, and applicants who are finding the process difficult.”

But he said the Home Office’s response had been “less positive and constructive than I had hoped”.

The government department accepted all but one of the report’s recommendations, which called for the system, which people do not have to pay to use, to be made “genuinely free”.

It denied that applicants were subjected to “hidden costs” identified in the report, such as phone operator charges when calling the scheme’s helpline and charges imposed by some councils for ID document scanning services.

It conceded some applicants may incur costs but said help and information was available by a variety of means, suggesting the costs could be avoided.

David Bolt’s report covers the five months to the end of August 2019, although Mr Bolt said most of the inspections were carried out between April and June.

Charity Migrant Voice said the relevancy of the report was “called into question by the long delay in its publication”.

Migrant Voice director Nazek Ramadan said: “The scheme has seen a big uptick in applications in the six months since the inspection ended and existing problems are likely to have been exacerbated (and new ones generated) in that time.”

It follows press reports about mistakes, including the story of a 101-year-old Italian man who has been living in the UK for more than 50 yearswho was asked to get his parents to confirm his i