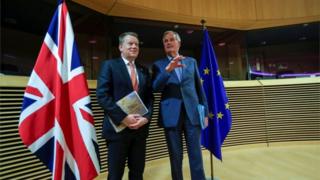 The UK and and EU negotiators have agreed to stage three further rounds of talks on a post-Brexit trade deal.

The new timetable was confirmed in a joint statement, which described the talks as “constructive”.

Downing Street has consistently said it is committed to agreeing a deal by December 2020.

The dates have been set for three full weeks of talks commencing on 20 April, 11 May and 1 June.

Face to face talks were cancelled last month because of the coronavirus outbreak – and Mr Frost and Mr Barnier both spent a period in self-isolation due to the virus.

During Wednesday’s meeting, the negotiating teams evaluated work that has taken place since both sides exchanged legal text in March.

The joint statement said that, while the work had helped to “identify all major areas of divergence and convergence”, there was agreement that further negotiating rounds were needed “in order to make real, tangible progress in the negotiations by June”.

Mr Frost and Mr Barnier also discussed the implementation of the Withdrawal Agreement.

Under the terms of the agreement with the EU, the UK has until the end of the year – during which it will con