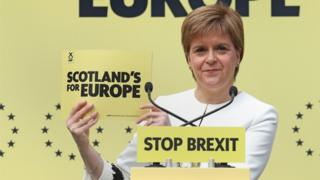 Image copyright PA Image caption Ms Sturgeon said the SNP has set out a “positive, progressive” vision in its manifesto

Nicola Sturgeon has insisted there is a “real chance” for Scotland to stay part of the EU as she launched the SNP’s manifesto for the European elections.

The SNP leader said voting for her party in next Thursday’s election would be an opportunity to “make Scotland’s voice heard”.

She claimed Westminster had “ignored the overwhelming vote in Scotland” to remain in the EU.

And she described the prospect of Boris Johnson becoming PM as a “nightmare”.

Ms Sturgeon, who is Scotland’s first minister, has backed calls for another referendum on Brexit – a so-called People’s Vote.

She has also said she wants another referendum on Scottish independence within the next two years if the UK leaves the EU.

Among the manifesto’s key pledges are:

Speaking at the manifesto launch in Glasgow, Ms Sturgeon urged voters to back the SNP in order to “send the powerful message that Scotland is for Europe”.

She added: “We can stand up for Scotland’s right to be heard, and we can proclaim our determination to remain a European nation.

“On 23 May people can send Theresa May – or whoever comes after her – a strong and resolute message: Stop Brexit and let’s keep Scotland at the very heart of Europe.”

Ms Sturgeon said her party was willing to work with others across the UK to give people a “final say” on whether the UK should leave the EU, and insisted that there is now “a real chance to keep Scotland in the European Union.”

She said: “Any Brexit deal agreed by Westminster must be put to the people with Remain on the ballot paper. If no deal is the only alternative, Article 50 must be revoked.

Ms Sturgeon went on to accuse the UK Government of having “ignored the overwhelming vote in Scotland” from the 2016 EU referendum, when 62% of Scottish voters backed the UK remaining in the EU.

She claimed the Conservative government at Westminster had “dismissed all attempts at compromise from the Scottish government” and had also “disregarded,