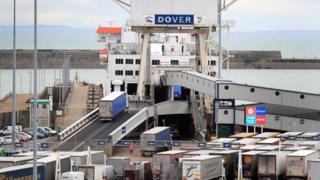 Businesses fear big hold-ups at the docks when the UK leaves the EU customs area because of untrained staff.

The British Chambers of Commerce says the government has not invested enough in training for companies faced with new customs paperwork to fill in.

But figures obtained by the BBC under freedom of information show just 878 firms have received a total of £17.5m.

HM Revenue and Customs said “the funding has already helped fund thousands of training courses as well as those companies improving IT hardware and growing staff”.

As it stands the UK, excluding Northern Ireland, is set to leave the EU’s customs area at the end of the post-Brexit transition period on 31 December this year.

The government has said it will refuse to extend the Brexit transition period, even if the EU requested a delay.

The deadline could be extended by up to two years but ministers and their EU counterparts would have to agree an extension before July this year.

Downing Street has said that any extension would keep the UK bound by EU rules when it instead “needs flexibility” to deal with coronavirus.

But Alex Veitch, head of international policy at the Freight Trade Association, said planning for an exit from EU rules at the same time as navigating the coronavirus crisis was “not possible”.

The kinds of jobs being furloughed “are those which are crucial to managing Brexit,” he added.

“It is the same people wrestling with the international freight challenge who would be the ones planning the Brexit challenge.”

Asking for an extension was a “reasonable” demand, he added, and his organisation would not have done so “before the coronavirus crisis hit”.

Under the government’s proposals for the future relationship with the EU, companies will have to complete customs declarations when exporting to or importing from the EU

Such declarations are not not necessary while the UK remains within the EU customs area.

HMRC estimates that between 150,000 and 250,000 companies who trade with the EU will be filling in customs forms for the first time.

Among other things the government’s grant money has supported attendance at 3,593 training courses for customs staff.

The government’s own UK Customs Academy, established to help provide the businesses with the customs expertise and training they need to meet the dema