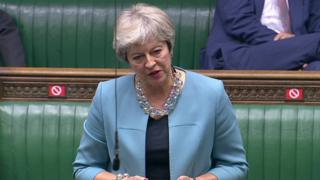 Former Prime Minister Theresa May has questioned how the UK can be “trusted” if the government moves to amend its Brexit deal with the EU.

Concerns have been raised about a law being brought forward which could change parts of the withdrawal agreement, negotiated last year.

But Mrs May warned it could damage the UK’s standing for future deals.

No 10 revealed on Monday that it would be introducing a new UK Internal Market Bill that could affect post-Brexit customs and trade rules in Northern Ireland.

Downing Street said it would only make “minor clarifications in extremely specific areas” – but it has worried some in Brussels and Westminster that it could see the government try to change the withdrawal agreement, which became international law when the UK left the EU in January.

The row comes at the start of the eighth round of post-Brexit trade deal talks between the UK and the EU.

The two sides are trying to