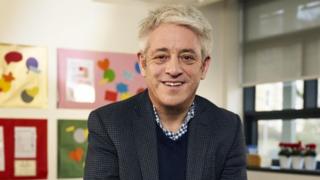 Former Commons Speaker John Bercow spent £1,000 on a taxi fare and £12,000 on leaving parties for staff in the run-up to his retirement.

Mr Bercow, who stood down before the election, also spent £7,000 on a US visit in his final months in the job.

His expenses were obtained via a Daily Mail Freedom of Information request.

A Commons spokesman said the 260-mile round trip from London to Nottingham, in April, was made by taxi rather than train for security reasons.

Mr Bercow, who was accompanied by an aide, travelled to Nottingham to deliver a speech at the Political Studies Association annual conference.

The speech was about how Parliament should respond to the “anti-politics age” and what the Parliament of the future might look like.

The taxi is reported to have stayed in the city during the speech, which was followed by a drinks reception.

Mr Bercow had travelled from London to Nottingham by train in 2018, for a meeting of the UK Youth Parliament, at a cost of £70, according to earlier Freedom of Information disclosures.

“Due to heightened security concerns for the safety of MPs, Mr Bercow was advised it was safer for him to travel to Nottingham Trent University by taxi, rather than by train,” said a Commons spokeswoman.

In May 2019, Mr Bercow spent £7,000 on a visit to Washington DC, to deliver a speech on the “role of Parliament in today’s Britain” to a think tank, a trip that also took in Virginia and Boston.

The former Speaker’s expenses also included a £118-a-month Sky TV subscription for Speaker’s House, the apartment within the Palace of Westminster where Mr Bercow lived with his family.

The biggest expense in the final months of Mr Bercow’s nine-year tenure as Speaker was staff leaving parties.

The £12,000 bill included an invoice for £3,168 for a retirement party for Speaker’s chaplain Rose Hudson-Wilkin.

Rather than retire, she became the Bishop of Dover.

Mr Bercow also spent £2,376 on a retirement party for the Commons invitations secretary in February, and a month later another £3,187 for a formal farewell to Clerk of the House David Natzler.

In May, the Speaker’s official acco