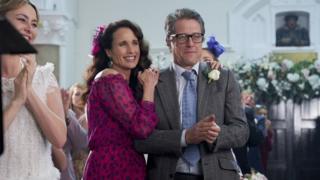 Towards the end of the 1994 film Four Weddings and a Funeral, the commitment-phobic Charles (played by Hugh Grant) has a meltdown minutes before his marriage.

Panicking in the vestry he can’t believe that after years of guzzling salmon and champagne at other people’s weddings he’s still deliberating and wracked by doubt on the brink of his own.

In the end a reassuring vicar helps him towards the altar.

In a Red Nose Day special on BBC One on Friday we’ll find out what happened to the characters 25 years on.

But I’m reminded of Charles every time I talk to an anguished MP (and that’s most of them) fretting about the choices in front of them.

At this five minutes to midnight moment, the House of Commons is still thinking.

It’s been clear for two years what MPs do not want.

Theresa May’s deal has now been rejected twice, while Labour’s plan for joining a customs union has never secured a majority.

Most MPs did not want to leave the EU, but apart from a minority insisting another referendum is needed to break the stalemate, they are reconciled to leaving.

The question is how?

And it is extraordinary that with the two-year Article 50 process about to expire, they are still kicking around alternative plans for the UK’s future relationship the EU.

In a farce that could be called Four Brexits and a Divorce, various cross-party groups of backbench MPs have spent months working on their own ideas for how the UK might leave the EU.

For instance, in the so-called Malthouse Compromise, a group of Tory MPs has put forward a proposal that would involve the UK buying a two-year transition period from the EU, but without a formal withdrawal agreement.

One of its supporters, former cabinet minster Damian Green, told me the UK and EU would use the time to negotiate a trade deal and the controversial Irish backstop would not be needed.

The EU’s current refusal to countenance such a plan has not deflated its supporters.

Other Conservatives have joined forces with several Labour MPs to advocate UK membership of the single market and a new customs arrangement – a plan dubbed “Common Market 2.02 or “Norway plus”.

Labour leader Jeremy Corbyn has recently shown an interest in this idea too.

Former Conservative chancellor Ken Clarke believes a Brexit that keeps the UK closer to the EU economically is the option most likely to find a majority in the Commons.