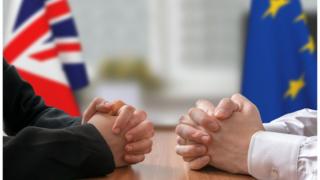 Talks to agree a UK-EU trade deal have been put on hold due to the coronavirus outbreak.

Negotiating teams were due resume talks on Wednesday although a face-to-face meeting had already been ruled out due to the virus.

A UK government spokesman has confirmed that the meeting will not go ahead “in the way we did in the previous round”.

Earlier, the foreign secretary told MPs the Brexit transition period will not be extended, due to the outbreak.

The prime minister’s negotiating team, led by David Frost was due to meet Michel Barnier on Wednesday, to continue talks on a deal to agree the future relationship between the UK and the EU after Brexit.

The UK government spokesman said: “Both sides remain fully committed to the negotiations and we remain in regular contact with the European Commission to consider alternative ways to continue discussions, including looking at the possibility of video conferencing or conference calls, and exploring flexibility in the structure in the coming weeks.

“We expect to share a draft FTA (Free Trade Agreement) alongside the draft legal texts of a number of the standalone agreements in the near future still, as planned.”

In the first round of talks between the UK and EU more than 200 officials split into 11 different working groups, sitting round 11 different tables in a conference centre in Brussels, discussing 11 different policy areas from the trade in goods to transport to energy to fish.

Since the coronavirus worsened, the two sides looked at whether they could replicate this set-up using video-conferencing and speaker phones.

They’ve given up because it’s just too difficult.

But the joint statement suggests that there still might be some contact this week between the two chief negotiators – David Frost for the UK and Michel Barnier for the EU – and they’re still searching for ways to hold virtual negotiations in the future.

There’s also a shedload of dense paperwork (450 pages and counting) for the teams to analyse.