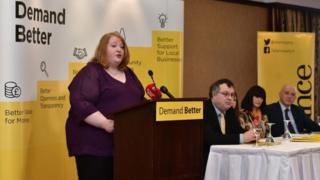 Alliance leader Naomi Long has said the current general election campaign is “one of the worst” she has ever fought in terms of “smears and lies”.

She was speaking as she helped launch her party’s manifesto at a Belfast hotel.

In recent weeks, banners attacking a variety of politicians and parties have appeared in North and South Belfast and in North Down.

The party is standing candidates in all 18 seats in Northern Ireland.

It had no MPs in the last Parliament.

Mrs Long told BBC News NI: “I think it is one of the worst elections that I have ever fought in terms of the levels of smears, the levels of lies. The levels of discrimination.

“I think it is just a fact now of the kind of culture that we see in politics where we treat people with disrespect where people are not allowed to differ and have a disagreement.”

Mrs Long, who won East Belfast in 2010 but lost it in 2015, refused to be drawn on what her target was in terms of winning seats.

She said: “Of course I want to win seats and of course we are ambitious to be represented at Westminster.

“It is the only level of government where we don’t have an elected representative.”

The party remains confident that it can win parliamentary seats next month.

The party wants a fresh EU referendum with the option to remain in the EU.