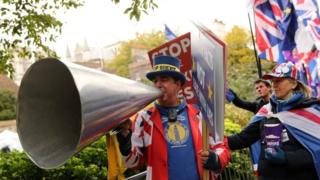 Anti-Brexit campaigner Steve Bray is to stand for Parliament for the Lib Dems.

The activist is a familiar figure in Westminster where he regularly bellows his ‘Stop Brexit’ message through a megaphone outside the House of Commons.

He has been selected to fight the seat of Cynon Valley in south Wales. It has been held by Labour for more than 30 years but its longstanding MP Ann Clwyd has retired and is not standing again.

The Lib Dems have vowed to cancel Brexit if they win power.

The party’s leader Jo Swinson dismissed suggestions Mr Bray’s candidacy was a stunt, saying the Lib Dems needed people prepared to put themselves on the line to stop the UK leaving the EU.

“He cannot be accused of not being committed to his cause,” she said. “To have candidates who care so passionately about that is a positive.”

Mr Bray, a rare coins dealer from Port Talbot, has spent every day since September 2017 protesting opposite Parliament, where his anti-Brexit antics having become a tourist attraction in their own right.

He and fellow protesters who he met through an anti-Brexit Facebook group also stage a daily evening vigil outside nearby Downing Street.

The 50-year-old says Brexit is a “wrong turn” for the country and must be stopped.

Mr Bray would appear to h