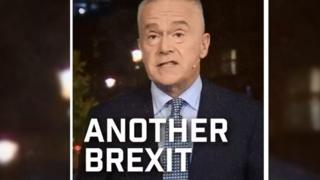 The BBC has complained to the Conservatives about a Facebook advert that uses edited footage of its news reporters and presenters.

The BBC says the material has been taken out of context and its lawyers have asked the party to remove the ad.

The 15-second video was first shown on Thursday afternoon and has so far been seen by more than 100,000 users.

The Conservatives said the footage had “not been edited in a manner that misleads or changes the reporting”.

“Pointless delay to Brexit” and “another Brexit delay” are among the lines of BBC News commentary used.

The clips are edited into a montage of protest footage and video of lively debate in the House of Commons all set to dramatic music.

“This is a completely unacceptable use of BBC content which distorts our output and which could damage perceptions of our impartiality.”

The BBC’s lawyers have written to party chairman James Cleverly asking the party to take down the advert.

According to the Facebook Ad Library, the Conservative Party has spent up to £2,200 on the advert so far, which is being targeted at 35 to 54-year-olds in England.

A spokesperson for the Conservative Party said: “This video uses contemporary news footage to remind voters of the deadloc