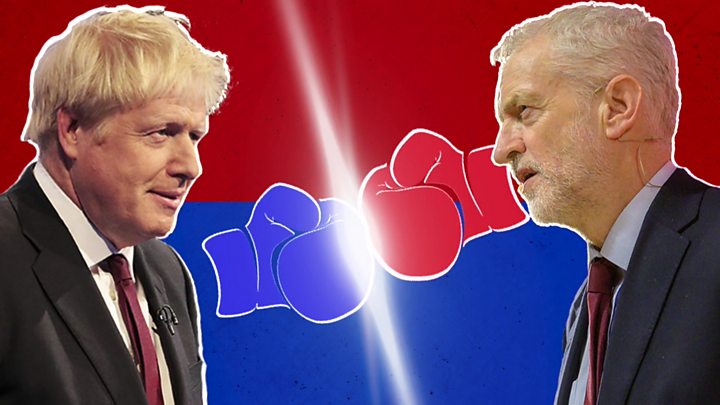 Media captionBoris Johnson and Jeremy Corbyn locked horns over the NHS, Brexit and the Royal Family

Boris Johnson and Jeremy Corbyn will go head-to-head for the second time later, in a live BBC election debate.

The hour-long BBC One programme, hosted by Nick Robinson, takes place in Maidstone and starts at 20:30.

It comes as the BBC’s Andrew Neil challenged Mr Johnson to submit to half-hour grilling on BBC One.

The other main party leaders have been interviewed by Mr Neil – but the Tory leader has yet to agree and has also pulled out of an ITV interview.

Labour leader Jeremy Corbyn was interviewed by ITV’s Julie Etchingham on Thursday night, but the prime minister has declined an invitation to take part in the channel’s series of leader interviews.

In a monologue at the end of Thursday’s programme – where he had interviewed Brexit Party leader Nigel Farage – Mr Neil issued a challenge to Mr Johnson.

“It is not too late. We have an interview prepared. Oven-ready, as Mr Johnson likes to say,” he said, in a monologue.

“The theme running through our questions is trust – and why at so many times in his career, in politics and journalism, critics and sometimes even those close to him have deemed him to be untrustworthy.

“It is, of course, relevant to what he is promising us all now.”

The Conservative Party has yet to respond to Mr Neil’s statement, although the PM has in the past rejected opposition claims he is avoiding scrutiny, pointing out that he has taken part in debates and interviews during the campaign with the BBC and other broadcasters.

Labour has accused the BBC of bias, in a letter to Director General Tony Hall.

Campaign co-ordinator Andrew Gwynne accused the corporation of being effectively “complicit in giving the Conservative Party an unfair electoral advantage”.

He said Labour had agreed to Mr Corbyn’s interview with Mr Neil based on the “clear understanding” that the Tory leader had agreed the same terms.

The BBC is expected to respond in writing to the Labour complaint, but a spokesperson said: “The BBC will continue to make its own independent editorial decisions, and is committed to reporting the election campaign fairly, impartially and without fear or favour.”

She said it was “bad enough” that her party had been “excluded” from the BBC’s head-to-head debate between Mr Johnson and Mr Corbyn, and “even worse that right now Boris Johnson won’t be held properly to account for his lies and extreme Brexit plans”.