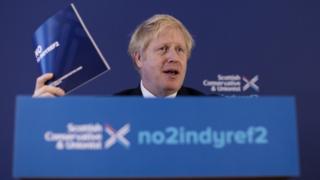 Boris Johnson has “guaranteed” there will not be a Scottish independence referendum if the Conservatives win the forthcoming general election.

The prime minister claimed Scotland had been “paralysed” by Nicola Sturgeon and the SNP over the past decade.

And he pledged that any request to hold indyref2 would be rejected with “no negotiation”.

He made the promise as he launched the Scottish Conservative manifesto ahead of the election on 12 December.

Speaking at the event in Inverkeithing, Mr Johnson ruled out allowing either a second Brexit vote or a fresh Scottish independence referendum if the Conservatives are forced to seek support from other parties to stay in power after the election.

The manifesto, entitled No To Indyref2, also outlines an oil and gas sector deal which the Conservatives say will help to protect more than 100,000 jobs in Scotland that rely on the industry.

Writing in the foreword to the document, Mr Johnson argued that Scotland had been “trapped like a lion in a cage” for the past decade.

And he said the country needed to move on from talk of a further referendum in order to “restore confidence and certainty to businesses and families” and to allow politicians to instead focus on improving public services.

He added: “You have been paralysed by Nicola Sturgeon and the SNP who simply refuse to accept your decision to keep our United Kingdom together. And that is why this election is so essential.

“If the outcome of this election is a strong Conservative majority government, then I can guarantee that we will reject any request from the SNP government to hold an independence referendum. There will be no negotiation – we will mark that letter return to sender and be done with it.

“You already made your decision five years ago, when two million Scots said no to independence. Nicola Sturgeon promised you this was a once-in-a-generation decision and I will hold her to that.”