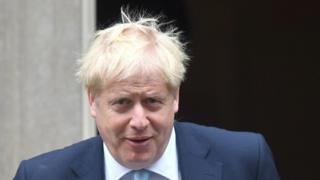 Image copyright PA Media Image caption The prime minister will set out his pledges for Wales, which includes investments in infrastructure

The prime minister will promise an “ambitious” growth deal to create an economic boost for communities living along the Wales-England border.

It follows the publication of the Conservatives’ UK-wide manifesto in Telford, Shropshire, on Sunday.

Speaking ahead of his visit, he repeated his plan “to get Brexit done” in order to “unleash this domestic agenda and deliver our exciting plans for Wales”.

The party’s UK manifesto included a specific section on Wales, which promised the country “major investments” in infrastructure and industry if the Tories win the general election.

It included some previous announcements, such as plans for a West Wales Parkway station outside Swansea, and promises on devolved issues that are the responsibility of the Welsh Government, such as delivering a new M4 relief road.

Other policies that apply to Wales include: