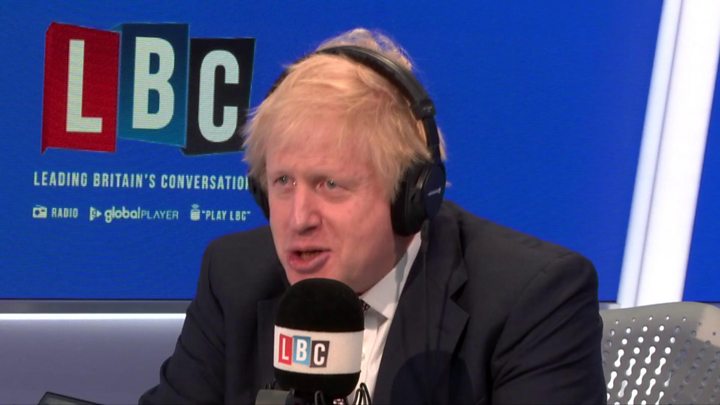 Boris Johnson has warned the US president against giving him an endorsement ahead of the general election on 12 December.

Donald Trump has previously backed the prime minister, calling him “the exact right guy for the times”.

But during an interview with LBC, Mr Johnson said it was “best… for neither side to be involved in the other’s election campaigns”.

Mr Trump is due in the UK next week to join world leaders for a Nato summit.

Protests have been planned against the president to coincide with a banquet at Buckingham Palace, where the Queen will host him.

In an interview on LBC on Friday, Mr Johnson was asked if the support of the US president was “welcome”.

He said: “We have very close relationships and friendships with the United States at every level of government, but what we don’t do traditionally as loving allies and friends… is get involved in each other’s election campaigns.”

Mr Johnson cited the moment former US President Barack Obama intervened in the 2016 EU referendum – saying in a press conference in London the UK was “at its best when it’s helping to lead a strong European Union” and would end up at “the back of the queue” for American trade deals if it left.

The PM said it was a “cardinal moment” of the campaign when Mr Obama “turned up and waded in on the side of Remain”, and it was “not entirely conducive to the good of that cause”.

Mr Johnson also joked that he had offered possible Democratic Presidential Candidate, Michael Bloomberg, his support when he was running for one of his terms as New York Mayor, “but he thought about it and said on the whole he wondered whether I could support his opponent”.

But he concluded: “It’s best when you have close friends and allies like the US and the UK… for neither side to be involved in other’s election campaigns.”

The comments come amid a growing row around whether the NHS would form part of a trade deal with the US after Brexit.

Earlier this week, Labour shared uncensored government documents covering discussions between UK and US negotiators ahead of formal trade talks.