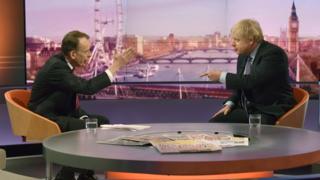 Boris Johnson gave a wide-ranging interview to the BBC’s Andrew Marr programme, focusing on security but also covering Brexit, and the NHS, as well as the plans of the Labour Party. Here are his most eye-catching claims fact-checked.

Claim 1:The government is putting extra money into counter-terrorist policing.

In September Boris Johnson’s government announced its spending plans for 2020-21. These only included increasing funding for counter-terrorism in line with inflation.

Those plans also include a pledge to continue for another year “the additional £160 million announced at Budget 2018.”

In fact, Budget 2018 only increased counter-terrorism funding by £59m or 8% on the previous year, as this written answer in the House of Commons shows.

The £160m is the difference between spending plans announced in 2015 and the figure eventually spent in 2019-20.

Claim 2: “Jeremy Corbyn has said he would disband MI5”

BBC News has asked the Conservatives for the evidence behind this claim, and is still awaiting a response. Labour has denied that Jeremy Corbyn wants to disband MI5.

The claim may relate to a campaign in 2015, run by a group called Socialist Campaign for a Labour Victory, which issued a statement with a number of demands including “disband MI5”.

Shadow Chancellor John McDonnell is still listed as a signatory on that website. He did admit to signing it according to press reports, though he claimed to have done so in error, and did not support disbanding MI5.

Current shadow Home Secretary Diane Abbott signed a parliamentary motion in 1989 calling for the abolition of MI5, but has since changed her views.

Claim 3: “We have a Queen’s Speech that was blocked by Parliament.”

In fact the Queen’s Speech was passed by 16 votes on 24 October.

The Queen’s Speech included a Sentencing Bill, which would change “the automatic release point from halfway to the two-thirds point for adult offenders serving sentences of four years or more for serious violent or sexual offences”.

Offenders considered “dangerous” already receive a Extended Determinate Sentence, of which around 250 were imposed last year.