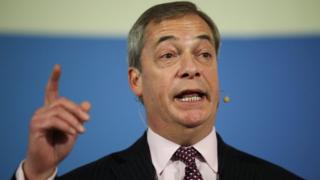 The Brexit Party will unveil its policies for the general election at a launch event on Friday.

Leader Nigel Farage has said he will not publish a manifesto, but make a “contract with the British people”.

The party will be standing in 275 seats – after deciding to stand down in the 317 held by the Tories in 2017 to help prevent a split in the Leave vote.

Although leaving the EU is the party’s focus, Mr Farage has already pointed to other policies he may pursue.

They include a cap on migration of 50,000 a year, abolishing the House of Lords and a large-scale tree planting programme across the UK.

Writing in the Telegraph ahead of the event, Mr Farage said his party would be “the new radicals” in Parliament.

He said he wanted the UK to return to “post-war norms”, repeating his migration pledge – conceding there may be a need for work permits to enable people from outside the UK to fill jobs – and his desire to tackle illegal immigration.

Mr Farage also pledged a £10,000 allowance for every UK company before they have to pay corporation tax, and said the party would continue to campaign for a “clean break from all EU institutions” after Brexit, with his MPs “vital in holding Johnson to his word” in Parliament.

“One of the least trusted terms in the English language is ‘manifesto’,” wrote Mr Farage. “In a word association test, many people equate it with ‘lie’.

“This is because politics has become so cynical in recent years. Parties make promises in their manifestos which they think voters want to hear, yet have no intention of keeping them.

“For these reasons, The Brexit Party is instead launching a contract with the British people. We trust that this word speaks for itself.”

Mr Farage claimed his new party – launched in April this year – was about “much more” than Brexit, as they wanted “to restore faith and trust in our institutions and political system”.

He added: “No other established party wants to do this. As a political force, we are here to stay.”

The event comes after an anti-Brexit campaign group bought the website thebrexitparty.com and offered to sell it to Mr Farage for over £1m.

Led by Donkeys – known for its posters and stunts – says it will increase the price by £50,000 a day, and if Mr Farage buys it, it will donate the money to the Joint Counci