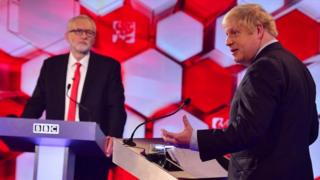 Boris Johnson and Jeremy Corbyn have faced off in a head-to-head debate – the last time they are scheduled to meet before election day.

BBC Reality Check looked at their claims during the hour-long debate.

Reality Check: Boris Johnson talked about his plans for 50,000 more nurses in the NHS in England by the end of the next parliament (ie five years).

We’ve previously looked in more depth at how realistic this goal is.

The Conservatives also say they will build and fund 40 hospital projects over 10 years – this has been repeatedly questioned in the campaign.

The party’s manifesto says they are proud “to have begun work on building 40 new hospitals across the country”.

They all have one thing in common – there is no building work happening as yet.

There will be £2.7bn over five years for the first six hospitals. For the remaining 34 projects, just £100m is available to develop business cases.

Jeremy Corbyn said: “There are now four million children living in poverty in our country”

Reality Check: One of the most commonly used measures of estimating children in poverty is using the Households Below Average Income (HBAI) statistics.

It estimates how many children live in UK households which earn 60% less than the median income.

There are two different ways it goes about doing this.

The relative low income figure is used by think tanks like the Resolution Foundation, and gives us an estimate of 4.1 million in 2017-18, or about 30% of children.

The Conservatives prefer to use the “absolute” figure, which is useful in comparing one year with another. Measured this way, the estimate would be 3.7 million children, or about 26%.

Boris Johnson said: Labour would “put up spending to £1.2 trillion”

That’s the Conservatives’ estimate of the extra spending Labour would make during the whole of the next parliament (ie five years).

But the Tories repeated the analysis and reached the same figure of an increase in government spending of £1.2tn over the course of the parliament.