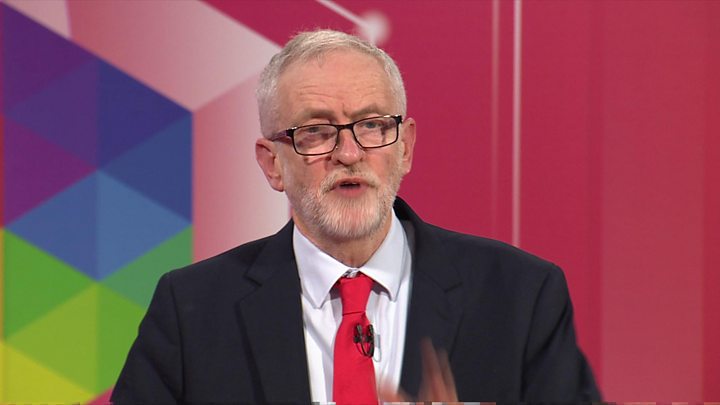 Media captionCorbyn: “I will adopt a neutral stance on Brexit”

Jeremy Corbyn has defended his decision to adopt a neutral stance in a future Brexit referendum as “a sign of strength” and “maturity”.

The Labour leader told a BBC Question Time leaders’ special on Friday that he would not campaign for Leave or Remain if his party wins power.

Prime Minister Boris Johnson questioned how Mr Corbyn could be “indifferent” on such a vital issue.

And Lib Dem leader Jo Swinson accused him of an “absence of leadership”.

But Mr Corbyn said acting as an “honest broker” was a “sensible way forward”.

If he becomes prime minister, Mr Corbyn has promised to negotiate a new Brexit deal with the EU and put this to a public vote alongside the option of Remain.

However, in Friday’s programme he confirmed he would maintain a neutral stance in this referendum before carrying out the result.

Speaking on a campaign visit to Sheffield on Saturday, Mr Corbyn said: “I think being an honest broker and listening to everyone is actually a sign of strength and a sign of maturity.

“Our country has to come together – we can’t go on forever being divided by how people voted in 2016.

“My role as the Labour prime minister would be to ensure that [another referendum] is carried out in a fair way, that the offers put are fair, and that I will carry out the result of that referendum.

“I think this is actually a sensible way forward that can bring people together.”

“This is the biggest issue facing our country for generations and he is just saying he is not interested in telling people what he thinks,” she said.

“Remainers in this country need a leader, not a bystander.”

Health Secretary Matt Hancock said Mr Corbyn’s stance “won’t wash” with voters, adding that the Labour leader had “decided to be indecisive” on the “critical question of our times”.

“You can’t ask the public to be prime minister of this country when you can’t even make your mind up on Brexit,” he told the BBC.

It’s not clear if the lively grilling of major politicians will shift the dial at this election.

But it certainly marked a shift in Jeremy Corbyn’s position on Brexit.