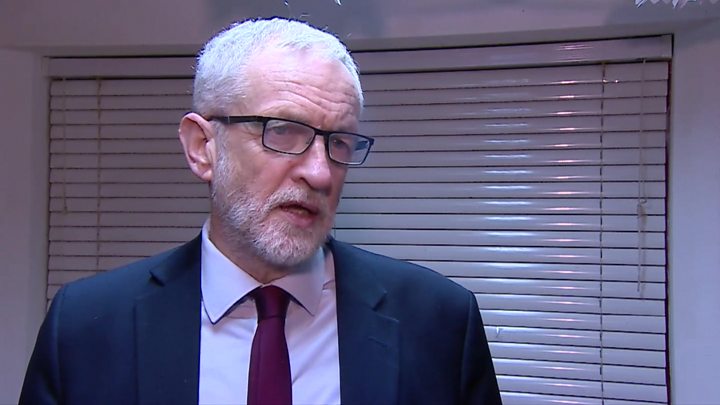 Media captionCorbyn: NHS would not be part of US trade deal

Jeremy Corbyn has said there would be “no deal” with the US, under a Labour government, if it insisted the NHS was included in post-Brexit trade talks.

The Labour leader has written to Donald Trump setting out his demands, ahead of the US president’s arrival in the UK for a Nato summit.

He said: “The British public need urgent clarity that our NHS is genuinely off the table.”

Boris Johnson has insisted the NHS is safe in the Conservatives’ hands.

The Conservative manifesto explicitly states that neither the price paid for drugs nor NHS services will be at stake in post-Brexit trade discussions with the US.

Mr Trump’s arrival in the UK, for an event to mark the 70th anniversary of the transatlantic military alliance, comes at a crucial time in the general election campaign, with just over a week left until polling day on 12 December.

Liberal Democrat leader Jo Swinson is calling on Mr Johnson to use discussions with Mr Trump on the sidelines of the Nato summit to seek protections for British farmers and consumers.

Ms Swinson claims that the leaked documents from UK-US trade talks show American officials are pushing for Britain to allow greater use of chemicals in food production, such as chlorine-washing chicken and growth hormones in beef cattle.

Ms Swinson said: “Johnson’s desperation for a post-Brexit trade deal with Donald Trump means UK farmers risk being undercut by low-standard imports from the US.

“Boris Johnson must give a guarantee that our farmers and world-leading food standards will not be sacrificed on the altar of a Trump trade deal.”

Mr Corbyn has repeatedly claimed that the NHS would be “up for sale” if the Conservatives win the election – something the Tory leader has dismissed as “nonsense”.

Last week, Mr Corbyn called a press conference at which he brandished an unredacted report that gave details of meetings between US and UK officials, where the general requirements of a trade deal between the two nations after the UK leaves the EU were discussed.

It included confirmation of a round of meetings on patented medicines, where officials explained how drugs were approved for use on the NHS and described a US request for “total market access” to UK public services as a “baseline” for an agreement.

Mr Corbyn said this was evidence that US drugs firms were pushing for patents on their most popular drugs to be extended,