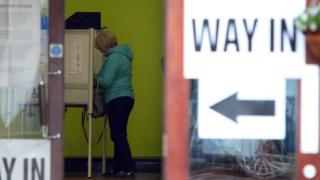 Fifty years ago, the way people voted in the UK was largely determined by social class, but different influences are at play in the 21st Century.

Back in the 1960s, political scientist Peter Pulzer famously stated that “class is the basis of British party politics; all else is embellishment and detail”. People in middle-class jobs were more likely to vote Conservative, and the working class were more inclined to vote Labour. Any other differences were relatively unimportant.

The picture is now very different. The kind of job that someone does is expected to make very little difference to how they will vote at this election. On the other hand, whether they are young or old may matter a great deal.

Polling companies divide voters into ABC1s (those employed in middle-class “white collar” jobs) and C2DEs (those in a working-class “blue collar” occupation). These two groups differ little in how they propose to vote at this election.

(The polls are GB-wide. Because of this, they cannot tell you anything meaningful about the demographic variation on the votes for SNP and Plaid Cymru.)

This trend has been in evidence for some time. At each of the last three elections, the Conservatives have advanced more strongly than Labour among working-class voters. In the last election, the difference between the two groups had become quite small. This election looks set to repeat that pattern.

Conversely, the Liberal Democrats used to pride themselves on attracting support from both sides of the class divide. That claim is now more difficult to sustain. At 19%, the party’s support among middle-class voters is markedly higher than among working-class supporters (10%).

Also striking, however, is the strength of support for the Lib Dems among graduates. On average, support is some 14 points higher among those with a degree than among those without. This reflects the fact that nearly all Lib Dem supporters voted Remain in the EU referendum, and that, in turn, university graduates are especially likely to back staying in the EU.

Support for the Conservatives is higher among those without a degree than among graduates – as might be expected, given that most of the party’s support comes from those who voted Leave. This, in turn, helps explain why the party is no longer more popular among middle-class voters than those in working-class occupations.

However, if voting no longer differs much between working-class and middle-class voters, it does differ between other groups.