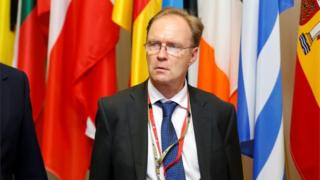 Boris Johnson’s push to “get Brexit done” by December 2020 raises the risk of leaving without a deal, the UK’s former ambassador to the EU has warned.

Mr Johnson has vowed to take the UK out of the EU on 31 January and strike a permanent trade deal within a year if he wins the election.

But Sir Ivan Rogers – who quit as the UK’s senior Brexit diplomat in 2017 – said this was “diplomatic amateurism”.

He also said Labour’s stance would “get the eye-rolling it deserves” in the EU.

Labour leader Jeremy Corbyn is promising to negotiate a new Brexit deal within three months, based on close alignment with the EU. This would then be put to the public in a legally binding referendum, alongside the option of staying in the EU.

If the Conservatives win the election, the UK could formally leave the EU by 31 January 2020.

However, even if the PM’s Brexit deal is approved by MPs, the UK will still enter into a transition period until at least December 2020 during which it would continue to follow all EU rules and regulations, as well as paying money into the EU budget.

In this period, Mr Johnson says he wants to reach an agreement with the EU on a future relationship – including a trade deal.

Under the withdrawal agreement, the transition period could be extended by one or two years, but the government has said it will not ask for such an extension.

‘The Ghost of Christmas Yet to Come’

Giving the Policy Scotland lecture at the University of Glasgow, Sir Ivan said politicians have been “thinking purely tactically and short-term” and suggested government ministers may be deliberately lying to the public about the reality facing the country.

He claimed the right-wing Brexiteers in the Tory party are “pretty confident” the trade deal Mr Johnson is publicly advocating will not be accepted by the EU and will lead to their desired no-deal outcome.

Comparing himself to Charles Dickens’s “rather forbidding Ghost of Christmas Yet to Come”, he said he was “pointing at a future which can still be changed but is highly likely to materialise if the message it brings is not heeded”.

Talks breaking down before the end of 2020 – when the future trading relationship is supposed to be settled – “is much likelier than people realise”, Sir Ivan said.

“The further ‘out’ of the European Union we choose to go, and therefore the further we want to go,