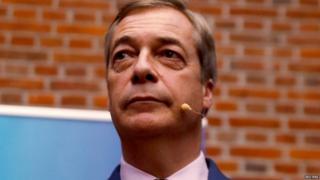 He said his party needed a “bridgehead” in the next Parliament to ensure Boris Johnson did not “sell out” the 17.4 million people who backed Brexit.

Mr Farage said his party could get “over the line” in a handful of seats.

And he warned of “years of indigestion” unless there were major changes to the PM’s “oven-ready” Brexit deal.

At his final press conference of the campaign, Mr Farage defended his party’s election strategy, which has seen it focus on Labour-held seats such as Grimsby, Hartlepool and Barnsley which voted to leave the EU in 2016.

He has come under fire from within his own party for not doing more to help the Conservatives win a Commons majority, an outcome which Mr Johnson has said will enable the UK to leave the EU on 31 January.

Four Brexit Party MEPs were suspended last week for urging Mr Farage, who has campaigned for the UK to leave the EU for decades, to scale back the party’s efforts to help the Conservatives.

A number of Brexit Party candidates in target Tory seats have said they have stopped campaigning in the final 48 hours before Thursday’s election and urged people to vote for their opponents.

Mr Farage suggested his candidate in Lincoln, Reece Wilkes, may have been effectively coerced into backing the Conservatives, saying he could “only imagine the pressure that individuals would have come under”.

He dismissed suggestions that the party was at risk of splitting the Leave vote, saying it was “tearing chunks” out of the Labour vote in seats like Grimsby, leaving the Conservatives in a strong position to win.

“Far from splitting the vote, in some parts of the country we are actually making Boris Johnson’s life rather easier,” he said.

Mr Farage said it was important his party was represented in the next Parliament to deliver a “proper” Brexit and keep Mr Johnson to his pledge to negotiate a Canada-style free trade deal with the EU, al