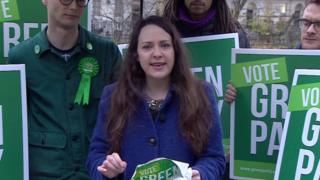 The Green Party has said it will write off £34bn worth of student debt as part of a plan to make education in England “free for life for everyone”.

It has outlined plans to cancel the outstanding loans of all those who attended universities in England since tuition fees rose to £9,000 in 2012.

Its deputy leader Amelia Womack said education was a “public good” and the pledge came with “no strings attached”.

The Greens are also pledging to scrap tuition fees, first introduced by a Labour government in the 1990s, for all future students in England and to restore annual maintenance grants, at an annual cost of £7.8bn.

Labour is also promising to scrap tuition fees and restore maintenance grants while the Brexit Party has said it will end “punitive” interest rates on student loans.

Neither the Conservatives nor the Liberal Democrats are proposing major changes although the Lib Dems have called for maintenance grants to be reinstated for poorer students and promised a future review of the model of student finance.

The Greens said their party is the only one standing in England committed to writing off outstanding student debt as a matter of “justice”.

“Education is a public good and we’re proud to invest in the next generation,” Ms Womack told supporters at a rally in central London.

“We say education should be free for life for everyone, but that is not enough. That doesn’t deliver justice for those paying off loans for decades to come so the Greens would go even further.

“If you went to university under the coalition’s eye-watering amounts of £9,000 fees, the Greens will wipe that debt, no strings attached.”

A review commissioned by ex-PM Theresa May earlier this year recommended it being lowered to £7,500.

At the moment, students do not incur any upfront costs but have to start repaying their loans once their income is above a