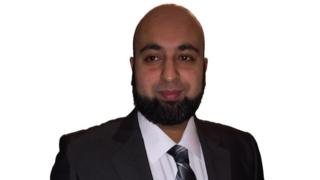 The Liberal Democrats have suspended an election candidate over alleged anti-Semitic and racist social media posts.

Waheed Rafiq was standing in Birmingham Hodge Hill and it is too late for the party to put forward a new candidate.

A party spokesman said the suspension decision was made two hours after it was made aware of the material.

In some of the posts uncovered by Buzzfeed – dating from 2010 to 2014 – Mr Rafiq allegedly stated he wanted to kiss “cute black women” and appeared to endorse the Syrian dictator Bashar Assad.

In a statement, the Lib Dems said the posts “are clearly and unambiguously anti-Semitic and bring the party into disrepute, and are also of material disagreement with the fundamental values and objectives of the party”.

Mr Rafiq said: “I am very upset by these remarks. I have been hacked, I am not this type of person.

“It has not been confirmed to me by the party that I have been suspended, though I can understand the party’s position in terms of wanting to distance themselves from someone who has the type of character these remarks imply.

In a further statement sent to the BBC, Mr Rafiq said in response to the party’s decision: “I am absolutely shocked and horrified that I am being left alone in the dark to deal with the press.

“There are hundreds of my posts that support Israel and my fellow Jewish people who have the right to defend themselves.”

He said he is “officially appealing against this” and asked the party to reinstate him.

The candidates standing in Hodge Hill are: