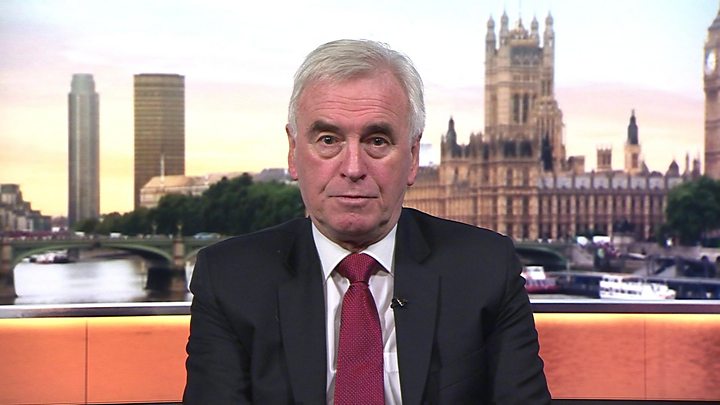 The Institute for Fiscal Studies “got it wrong” when it described Labour’s tax plans as “not credible”, the shadow chancellor has said.

John McDonnell rejected analysis by the independent research group that said the party’s manifesto pledges required broader tax rises than it had outlined.

He insisted 95% of people would pay no more tax than they do now.

Labour’s 105-page general election page manifesto promises to “transform the UK” with a £75bn house building programme and the renationalisation of the railways, mail, water and energy – funded by tax increases on higher earners and reversing corporation tax cuts.

The pledges would add £83bn to annual government spending by 2024.

The IFS said there were “risks” with Labour’s plans, with its director Paul Johnson adding: “It will be extremely hard simply to deliver anything like this scale of increase in capital spending, at least in the near-term, certainly in an efficient and cost-effective way.”

But Mr McDonnell told BBC Radio 4’s Today programme: “I’ve a great deal of respect for the IFS… I just think they’ve got it wrong on this one.

“What we’re saying is in terms of income tax, yes the top 5% will pay a bit more – and actually not a great deal more but they’ll pay a bit more. The [other] 95% of earners will not pay an increase in the income tax rates or in VAT or in National Insurance.”

He said Labour was proposing to “reverse some of the corporation tax cuts that have been given away by the Conservatives and Liberal Democrats over the last 10 years”, but the rate would remain “competitive”.

‘Think for the long term’

The shadow chancellor added: “With the structural changes we will make in the economy, we’ll make sure that actually the corporations themselves do not take that easy option of cutting wages or rising prices, but actually because we’re democratising the way these corporations work and are more accountable, they will actually invest in their companies.

“Instead of being driven by short-term profiteering and shareholder interest only, they will think for the long term, invest and grow the economy.”

Speaking on BBC Breakfast, Mr McDonnell said the the IFS assessment had also been “challenged by economists across the piece”.