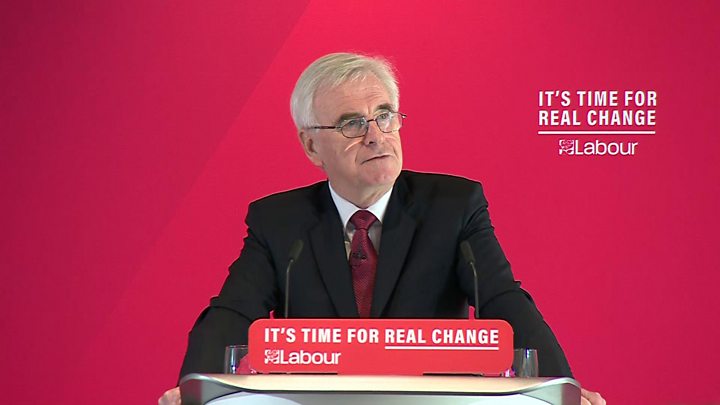 Media captionMcDonnell: Labour will lay ‘foundations of a new economy’

In a speech in the West Midlands, he said Labour’s plans could save families more than £6,700 a year, although experts have questioned this figure.

He reiterated measures including raising the living wage to £10 an hour and scrapping universal credit.

And last month influential research group the Institute for Fiscal Studies (IFS) said neither the Conservatives nor Labour were offering “credible” spending plans ahead of the general election on 12 December.

Speaking at an event in Birmingham Mr McDonnell said his party wanted to “abolish poverty once and for all”, saying the level of inequality in Britain was not reflective of a country with Christian roots.

“Children going hungry and homeless in the fifth largest economy in the world begs the question: are we really living up to the values of Christianity – or any other of our religions or beliefs for that matter?” he said.

“We don’t believe it’s enough to offer people a hand up out of poverty. We want to abolish poverty.

“That’s why we committed in our manifesto to abolishing in-work poverty within five years.”

Labour’s figures for boosting household income may not stand up to close scrutiny – mixing immediate benefits with less certain promises of lower utility bills in future.

But the political message that “you will be better off with Labour” is seen by some party insiders not only as essential, but overdue.

John McDonnell’s speech was in the West Midlands – part of the country where traditional Labour voters who backed Brexit are showing more willingness to support the Conservatives this time.

And they need good reasons to. In union leader Len McCluskey’s words: “Come home to Labour.”

It was felt that Labour’s myriad “retail offers” – from free broadband to reducing rail fares and offering free prescriptions and dental checks – hadn’t been quite as popular as anticipated.

So the announcements are being repackaged, to get across the message that the party will put money in your pockets, unless you are already well-off.

This in part was due to Labour being put on the back foot on its tax plans, getting bogged down in arguing over whether anyone outside the top 5% would be worse off.

Now the party wants to go on the front foot and stress that the message isn’t so much “you won’t pay any more”,