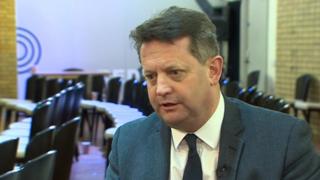 A senior Welsh Labour politician has criticised the party’s election campaign, and attacked a shadow cabinet member as “utterly useless”.

The Labour Party has been asked to respond to the criticism.

Mr Davies shared his view on Twitter of the latest seven-party debate, saying: “Burgon is utterly useless. Totally out of his depth. Got shown up again tonight. These people are allowing and enabling the election of this dreadful Tory Govt.”

He also tweeted: “OMG. @RichardBurgon is an embarrassment. And it’s time that @WelshLabour and @UKLabour learnt how to run a UK-wide political campaign.”

Got it. Price asks: “Why isn't it possible in Wales where you're the party of govt?” pic.twitter.com/LBGzzwjZXE

In response, Mr Davies tweeted: “For those of us in @WelshLabour it is a moment of utter embarrassment.”

The former Welsh local government minister also said he found it “surprising” that First Minister Mark Drakeford as Welsh Labour leader had not put himself forward as the party’s spokesman in Welsh debates.

However, a senior Welsh Labour source said Mr Drakeford was taking part in Welsh party leaders’ debates and interviews for the BBC and Sky.

The source added that there were other cases where the broadcasters had sought parliamentary candidates to take part. Mr Drakeford is not standing in the general election.

Mr Davies declined to comment further on his tweets when contacted by BBC Wales.

Meanwhile, Labour’s shadow business secretary Rebecca Long-Bailey has withdrawn a call she made on Friday’s BBC election debate in Cardiff for a public inquiry into what she called “horrific” maternity failures at Cwm Taf Morgannwg health board.