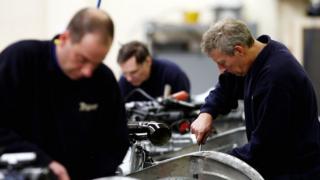 Labour is promising to base a network of small business advisers in Post Office branches if it wins next Thursday’s general election.

The party says the advisers would form part of a wider agency to help firms access advice and bid for government contracts.

The party says it would also help small firms by replacing business rates with a tax based on land value.

But the Conservatives said Labour would bring higher taxes and uncertainty.

The Tories have pledged to reduce business rates for smaller firms, and give them a bigger discount on National Insurance payments.

Labour’s shadow business secretary Rebecca Long-Bailey said smaller companies are “being stretched to breaking point by global corporations which evade their taxes and fail to pay their suppliers on time”.

“Labour wants business support and finance to be available for entrepreneurs from the moment the seed of an idea is planted,” she said.

The party also plans to set up a website offering support to smaller firms, and free full-fibre broadband for every business and home by 2030.

And it is pledging £250bn in loans for businesses over ten years, provided by a network of regional and national development banks.

In addition, it says it would requiring government contractors to pay their suppliers on time or else face a ban from bidding for public cash.

But the Liberal Democrats said Jeremy Corbyn’s pledge to renegotiate the PM’s Brexit deal and put it to a referendum undermined Labour’s plans to support business.

Labour has pledged to offer voters a choice between its deal or remaining in the EU – it has not said which option it would back and Mr Corbyn has said he would stay “neutral” during the campaign.

Lib Dem business spokesman Sam Gyimah said smaller firms have “made it abundantly clear that any form of Brexit – be it red or blue – will harm their ability to hire staff, make it more difficult to export to our closest partners and ratchet up the cost of doing business”.

“It is only the Liberal Democrats who will stop Brexit and bring forward a bold vision to support small businesses in the UK,”