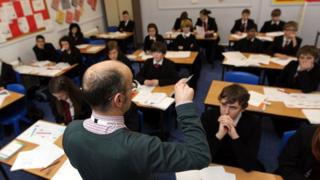 The Labour Party is promising to cap class sizes at 30 pupils across all schools in England if it wins next week’s election.

The pledge is an extension of a commitment in its manifesto to limit classes to this size at all primary schools.

The party said it would fulfil the pledge by recruiting nearly 20,000 extra teachers over five years.

The Conservatives said English schools were rising up international rankings.

The party has pledged an extra £14bn over the next three years for schools in England.

Labour’s pledge to recruit nearly 20,000 teachers is similar to a promise made two weeks ago by the Liberal Democrats.

Lib Dem education spokeswoman Layla Moran accused the party of trying to “copy” them, but added that Labour had “no hope of meeting this target”.

She added that Labour would not be able to “square these promises” with leaving the EU if voters back the party’s Brexit deal in its planned referendum, due to “thousands of EU teachers coming to work in schools each year”.

Labour said the recruitment would be funded from an extra £25bn in schools spending over the next three years. The party has also committed to ensuring all teachers have formal teaching qualifications within five years.

“We will invest in record per pupil funding, restore the pupil premium and close the gap in support for children with special educational needs and disabilities, to give every child the support they need,” she said.

She accused the Conservatives of having “slashed school funding for the first time in a generation, leaving pupils taught by unqualified teachers, crammed in to super-sized classes, and not receiving the support they need”.

There is a teacher shortage in England, with the latest official statistics showing a 15% shortfall in numbers beginning training for secondary schools.

But Labour’s promise to recruit more may not be easy to deliver.

In subjects such as physics, fewer than half the required graduates have begun to train.

Schools hire teachers, not the government, and it is harder to attract and keep teachers to work in poorer areas.

The party also says it would cap all class sizes at 30. At the moment, just over 12% of secondary pupils are taught in classes with between 31-35 pupils.

In 2009, when Labour was last in government,