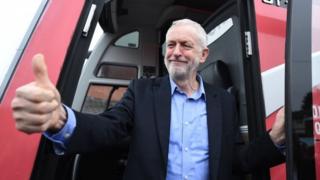 The Labour Party is to re-shape its general election campaign strategy – particularly in Leave-voting areas – to try to turn around a stubborn Conservative opinion poll lead.

Insiders told the BBC that in the first half of the election campaign, a key error was that the Liberal Democrat threat had been overestimated, while the willingness of Leave voters to switch from Labour to the Conservatives had been underestimated.

In the last two weeks of the campaign, this will change.

Labour’s strategy so far has been – in part – to emphasise that the election is about more than Brexit and to get voters to focus on issues which would unite Labour voters in Leave and Remain areas.

Labour’s own polling suggests this has been a partial success – but there is a crucial flaw.

In some Leave-supporting areas, the defining issues for voters have become the NHS and the cost of living, with Brexit further down the list of priorities.

That should be good news for Labour – safer, “home” territory.

But, despite this, the party is still seeing its vote drain away in the very places that it needs to retain to deprive Boris Johnson of an overall majority.

So a new plan has been hatched and is about to be put in to effect.

It is designed to appeal to those who voted for Brexit, and to those who have other concerns but just don’t think Labour is on their side.

In the next two weeks, if you live in a Leave area, you are likely to see a very different style of campaign.

Activists on the move

Labour will give a higher profile to shadow cabinet members who back a Leave deal rather than Remain.

There will also be a tour of Leave areas by the party chairman Ian Lavery, who ideally would rather leave the EU with a deal than remain.

The “honest broker” himself – Jeremy Corbyn – will be touring some Leave seats very soon too.

And more activists are set to be moved to Leave areas.

The message will be that Labour’s Leave deal would offer voters a genuine choice – and that a new referendum will not be an attempt to remain in the EU by the back door.

There will be an attempt to explain the deal Labour is seeking to negotiate – and that it would protect workers’ rights.

In other words, the party leadership is not opposing Brexit by opposing Boris Johnson’s deal – it simply wants to find what it regards as a better one.