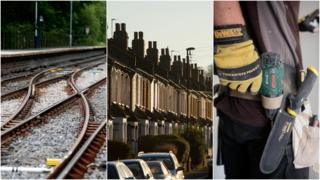 Labour will promise an “investment blitz” across England to bring “wealth, power and prosperity” to communities.

The party will launch a regional manifesto for each part of the country on Friday, including pledges on transport, housing and jobs.

Shadow chancellor John McDonnell said the announcement will “bring our country back together”.

But Tory minister Jake Berry said it was “a clear distraction from Corbyn’s failure to set out a Brexit plan”.

Each manifesto will outline plans for individual regions, with most of the pledges to be paid for by Labour’s £250bn Green Transformation Fund – a pot of money raised through borrowing it promises to spend on projects to improve sustainability.

The pledges include a number of transport projects, such as:

Labour also says the fund will create a million green jobs across the UK, if it wins the general election on 12 December.

In the regional manifestos, a number of new announcements to move towards that goal will be confirmed, including:

Mr McDonnell said: “Britain is one of the most unequal countries in Europe, but under Labour that will change.

“Labour will govern for the whole of Britain, handing wealth and power back to every community and giving everyone a better life… rebuilding our public services and kick-starting a green industrial revolution that will bring prosperity to every region while tackling the climate and environmental emergency head on.”

He added: “We’re investing in our collective future and your family’s future to get the economy moving again in every part of Britain, with new industries, better, well paid jobs and communities we can all be proud of.”

Labour has an issue with supporters,