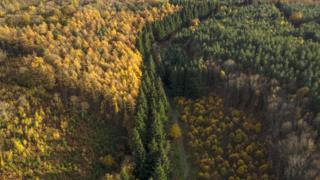 Labour claims it would plant two billion new trees in England by 2040 if they win the general election.

The party is also promising 10 new national parks during its first term, as part of its “plan for nature”.

The Tories want to plant 30 million trees a year, the Lib Dems have pledged 60 million if they win power.

Friends of the Earth has hailed Labour’s plan – which would mean more than 270,000 trees being planted a day – as the most ambitious of the three.

The Green Party has pledged to plant 700 million trees by 2030, and Brexit Party leader Nigel Farage has also said he would support a wide-scale tree planting programme.

Labour claims its plan will lead to 20,000 new green jobs in forestry management and timber trades, contributing to its overall goal of creating a million green jobs if it wins the race to Downing Street.

Speaking at the launch of the policy on Thursday, leader Jeremy Corbyn will say: “This election is our last chance to tackle the climate and environment emergency. Labour is on your side and on the side of the environment.”

Labour says it will make £2.5bn available to plant the trees in a number of sites, including urban parks, farmland and schools.

And along with the new national parks, the party will invest an extra £75m a year into new and existing park authorities to manage them.

Areas being considered for the parks include the Malvern Hills, Chiltern Hills, Lincolnshire Wolds and North Pennines.

Labour says it is aiming for 75% of the population in England living within half-an-hour of a national park or an area of outstanding natural beauty.

These moves – alongside the investment into restoring habitats, such as woodlands, grasslands and meadows – could help store up to 47 million tonnes of CO2 each year by 2050, and allow endangered species to recover.

The party said it would also reverse the 20% cuts the Conservative have made to the annual national park authorities budget since 2010, increasing funding by 50% “in order to enable the parks to provide natural solutions to the climate and environment emergency”.

Our Reality Check team has asked Labour where its figures came from – but looking at statistics provided by the government in March, the Conservatives cut the authorities’ budget by closer to 10% in cash terms (comparing the numbers directly) or 25% in real terms (when inflation is taken into account).